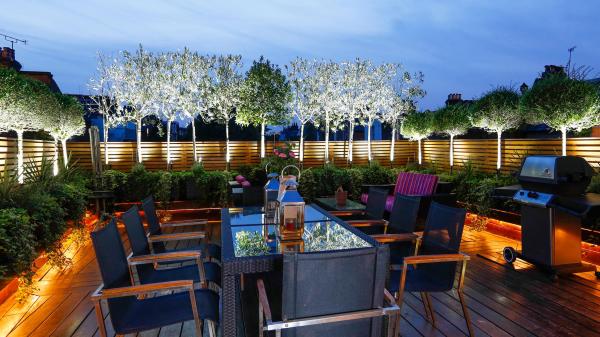 Party season is approaching, so now’s the time to make things pretty and inviting outside as well as indoors. Lighting is a transformative thing in a garden, and once it’s installed, you won’t be able to imagine living without it. Not only does it help with the practicalities of navigating safely in the dark, it has the wonderful effect of bringing the outside in, so you can feel connected and joyous about your garden whatever the season.

Even if nobody dreams of setting foot outside when they come round for a festive glass or two, shifting the focus from indoors to out with something twinkly will add an extra layer of magic to the proceedings.

As you would when lighting a room, you need to think about layering the effect. Begin with uplighting, placing the lights in your borders or flowerbeds, at the base of walls and under trees or shrubs. This is by far the prettiest and most atmospheric type of lighting — the equivalent of a 5-amp lamp circuit indoors — and can be recessed into the ground. Try Uniled LED deck lights (£180 for a pack of four; moonlightdesign.co.uk).

Less work to install are spike lights such as Hunza’s Outdoor Spike Spot (from £85 each; as above) or the more affordable stainless-steel ones from Mr Resistor (£61 each; mr-resistor.co.uk). All need a connection to an electricity supply via an outdoor transformer.

There is a huge choice out there, and those at the top end are eye-wateringly expensive. “You really do get what you pay for,” says Jo Thompson, a leading garden designer, “but bear in mind that less is more. You probably don’t need as many lights as you think.” This is good news, as it will save you money and avoid your plot resembling a corporate garden party.

Think about creating romantic drama: pick out individual trees or shrubs and highlight seating, statues and pergolas. The golden rule is to keep things as softly textured as possible by using foliage around the lights, and angling the beams onto surfaces such as attractive tree trunks and trellising, rather than just into thin air and straight into your eyes.
Downlighters
Attaching lights to your walls is an excellent way to pick out your garden’s boundaries. Go carefully here, though, as too much, directed wrongly, can make things look stark and uninviting, like a naked ceiling bulb. For informal schemes, use something adjustable so you can direct the beam where you want it. Syon spotlights should do the trick (£126 each; johncullenlighting.com).

Otherwise, fixed downlighters picking out the textures of a trellis or brick wall covered in foliage is fantastically smart and dramatic, as long as you stick to the “less is more” rule of thumb. David Haslehurst, managing director of Moonlight Design, says it best when he points out that “the darkness is as important as the light”.

Downlighting is a lovely option for paths, using bollards such as the Techmar Elan (£87.50; gardenlightshop.com) to cast pools of light, either randomly or in a distinct pattern. Consider staggering these, and placing them slightly away from the path to highlight foliage as well as attractive hard landscaping. Height is important here, too, and you can play around with different bollard sizes to create a range of effects.

Swivelling downlighters such as the Hunza border light (£158 from Moonlight Design, as above), set on posts that go directly into flowerbeds, are a great way to pick out prized plants without any glare. If you’re short on time, battery-powered units are quick and easy, requiring no wiring. Mrbeams.co.uk has a pack of two motion-sensitive path lights for £34. They switch on automatically when you’re a few feet away. 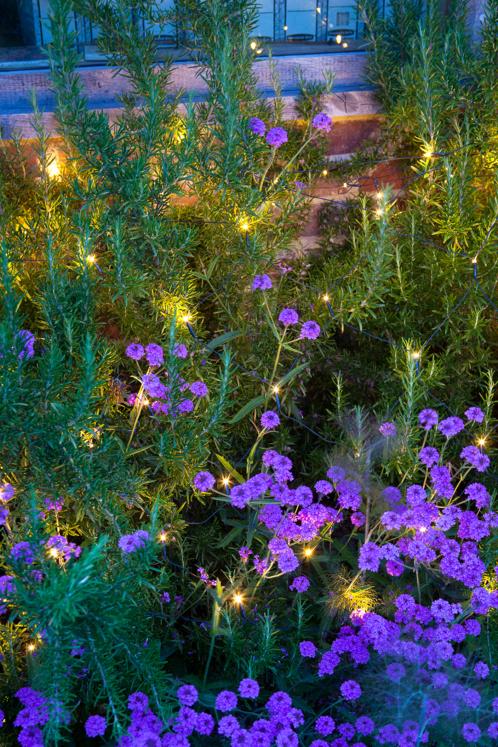 Don’t forget your pond or water feature, which can become a work of art after dark. For hassle-free installation, weighted lights such as the Hunza Weighted Pond Lite are the way to go (£187; lightideas.co.uk). “The best way to highlight a water feature is to uplight moving water,” says Robert Heath, sales director at Light Ideas. If you don’t have movement, make sure your light comes up though some aquatic plants or marginals instead.
DIY
Low-cost, high-quality garden lighting without the need for an electrician is now a feasible option for those with no experience, thanks to companies such as gardenlightshop.com and its sister site, lightprotrade.co.uk, which sell easy-to-install kits that plug into a normal 13-amp socket. You decide which lights you want, calculate the wattage and decide how much cable you’ll need, then the lights, cabling and outdoor transformer are sent to you, ready to go. As well as being easy to install and extend, these systems are guaranteed for between five and seven years, and are safe for use around children and pets. Always look at DIY and Tools reviews before buying the tools you’ll need to set up though. 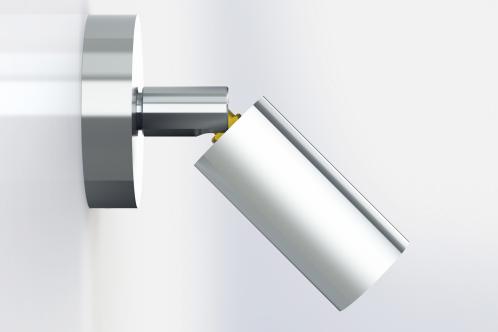 Party lights
Covering a tree with fairy lights creates instant glamour and is one of the best ways to create a magical, inviting place for your guests. Again, don’t go overboard or you’ll annoy your neighbours — it’s a garden, not a shopping centre in festive mode.

Fairy lights can also be used around all manner of frames, from pergolas to hula hoops, scrunched up and placed in artfully messy “balls”, erupting from empty terracotta pots or flung over a hedge or bush. There’s a wide range at sarahraven.com, including net ones (from £33) for an even spread of light. Most are battery- or solar-powered.

There are all manner of gorgeous hanging baubles on the market, too. Sarah Raven’s Allium lights (from £32.50; as above) are a joy suspended from a branch or pergola. Generous swags of larger lights are elegant over a terrace or eating area for a party. All you need to coax guests outdoors is a few cushions, some warm rugs and perhaps a fire pit.

And if you want to shine on a budget, save up those jam jars, shove a tealight into each one and arrange them along paths and around the garden for an instant winter wonderland.

The National Trust – One of Britain Treasures

Travelling to the Grand National

Experiencing the Great Outdoors Can Be the Only Prescription You Need