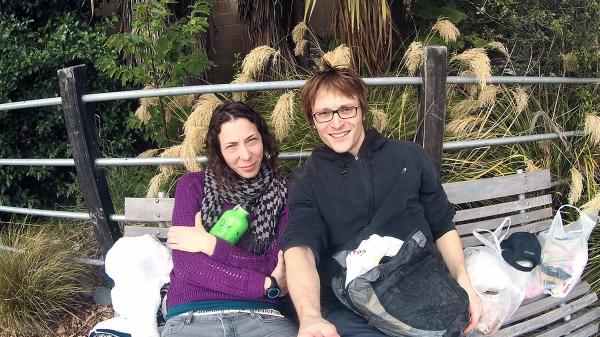 Pale, gaunt and sobbing a Czech tourist admitted to making “tragic” mistakes that led to her boyfriend falling to his death down a ravine and sheltering alone in a hiking hut for almost a month in New Zealand.

Pavlina Pizova, 29, was discovered on Wednesday — only a day after rescuers found out that the couple had set off on a perilous winter hike without telling anyone of their plans.

Ms Pizova told how she stayed with her partner Ondrej Petr, 27, after they fell 23ft down a ravine and watched him die, listening to his last breaths.

They had wandered off the trail in heavy snows on July 28, two days after setting out to hike the 20-mile Routeburn track on New Zealand’s South Island. “I underestimated the winter conditions” she said, and admitted that it was a tragic mistake not alerting anyone about their hiking plans along a trail where snow is waist high.

Mr Petr was trapped between trees and rocks and unable to move, and Ms Pizova could not free him despite her desperate efforts. He died soon afterwards and she stayed next to his body that night. It took two days of inching through snow to find an empty hut, which she broke into.

“The recent heavy snows meant I was walking through waist-deep snow and because all track markers were covered, I had to find my own way. During this time I got extremely cold, exhausted and my feet were frozen,” Ms Pizova said yesterday after being airlifted to the resort of Queenstown.

When she reached the hut late on July 30, her numbed fingers had turned white and her feet swelled drastically when she removed her boots. It was days before she could put them on again.

In the hut she found an emergency food supply and firewood, but she was unable to decipher the instructions written in English on how to operate the hut’s emergency radio transmitter.

She would spend 24 days alone in the hut. Nobody in New Zealand was aware of her plight or even that the couple had set out to walk the trail.

It was only when Vladka Kennett, the honorary consul for the Czech Republic in New Zealand, was browsing Facebook on Sunday night and saw a “random” post from anxious relatives of the couple in the Czech Republic that the alarm was raised.

Ms Kennett replied and obtained a picture of the Toyota car that the couple had bought in New Zealand in late February after they arrived for a working holiday, which she passed to police.

She said the relatives were concerned but assumed that the couple had simply lost their mobile phone. The Facebook post betrayed no great alarm and said simply: “Hey, I’m wondering if anyone has any news?”

The relatives had no idea where in New Zealand the couple were.

On Tuesday police found the car covered in snow in a mountain car park near the track’s starting point. After flying over the track on Wednesday they checked the hut and found Ms Pizova.

Yesterday she said that she had made several attempts to leave, trying to walk in snow-shoes she had made out of plastic vegetable baskets. She also used ashes from a fire to write a large “H” in the snow.

Ms Pizova wept yesterday with Ms Kennett at her side. “At the hut, considering my physical health, the deep snow conditions, knowing there were avalanche paths ahead of me, I knew it was best to stay in the safe place,” she said. “I saw numerous avalanches coming down.”

The Basic Outdoor Kit for All Activities

Derive Your Inspiration from The Landscape Around You