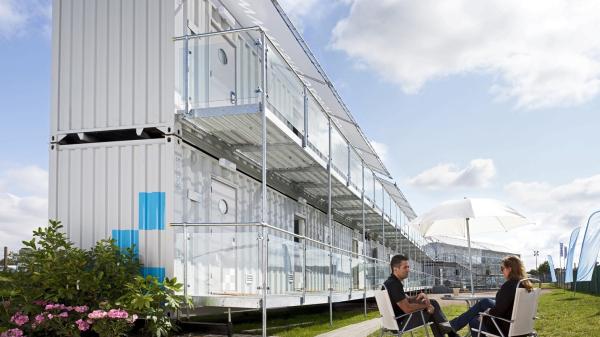 Shares in Snoozebox fell out of bed, again, yesterday after the portable hotel operator warned that it may not be able to continue as a going concern. The bleak announcement from the AIM-quoted company, which followed the abrupt resignation of Lorcán Ó Murchú as chief executive on Monday, sent its shares tumbling another 60 per cent, or more than ½p, to less than ½p.

Snoozebox had floated at 40p four years ago, to some fanfare, but it has endured a tumultuous period on the stock market since. Yesterday the provider of temporary accommodation at events and festivals revealed the initial findings of a review designed to put the business on a “sustainable financial footing”. It warned that unless it secured new customers, it expected revenues to decline this year, after an expected adjusted loss for 2015 of about £5.5 million.

Snoozebox, which raised £5 million last December in a placing at 6p a share, reiterated that it may need to find additional funds or explore options, such as a sale of the business. It also said that it had sufficient working capital in the short term to complete and begin the execution of its review and added that it had begun discussions with its main lender seeking a change to its debt service obligations. Nevertheless, it warned that it “may be unable to continue as a going concern” if talks failed or if it did not secure new customers.

The going was smoother on the FTSE 100, where the top share index closed up 23.60 points, or 0.38 per cent, at 6,284.52 as several big companies unveiled positive corporate trading updates. Standard Chartered was the standout performer, enjoying its best bounce since 2009 as it rallied 50¾p to 571½p. Investors overlooked a steep fall in quarterly profits to take heart from signs of a turnaround at the emerging markets-focused bank.

BP climbed 15½p to almost 376p after investors cheered quarterly results that showed its refining and trading business helping to offset losses in its exploration and production division. A higher Brent crude price also eased the pressure. The international oil benchmark rose by 2 per cent in London to $45.38 a barrel on a weaker dollar ahead of today’s meeting of the US Federal Reserve.

Housebuilders extended their recent recovery as fears over Brexit receded in the wake of the intervention of President Obama last week. Berkeley Group, the London-focused upmarket builder most exposed to upheaval in the event of a Leave vote, rallied 95p to £30.74.

Still with the risers and Paddy Power Betfair rebounded 390p to £87.65 as Morgan Stanley upgraded the recently merged betting group to “overweight”, forecasting a boost from “signs of accelerating cost-cutting and strong industry growth”.

In the FTSE 250, which closed down 20.19 points at to 16,945.49, Cobham was by far the biggest faller, spinning 37½p to 177½p after the aerospace and defence manufacturer warned on profits and launched a £500 million emergency rights issue.

Finally, McCarthy & Stone, off 1½p at 250½p, could come under pressure today after investors who floated the retirement accommodation developer, including a consortium of hedge funds and private equity firms such as Goldman Sachs and Anchorage Capital, moved to offload about 14 per cent of the company following last November’s IPO at 180p a share.

Some cracks in the brickwork
Britain’s second-largest brickmaker had a disappointing first day of unconditional trading on the London Stock Exchange, ending the session below its flotation price (Tom Knowles writes).

Forterra made its stock market debut last Thursday in an offering that valued the company at £360 million, pricing its float at 180p a share, having failed to hit its target of a £450 million valuation.

The Northampton-based company, which generates about 95 per cent of its sales from the British residential market, had said that the flotation would allow investors to take advantage of the housebuilding boom.

The IPO was part of an exit by Lone Star, Forterra’s private equity backer, which bought it from HeidelbergCement a year ago for £990 million. Lone Star will retain a 65 per cent holding.

Forterra follows in the footsteps of Ibstock, its larger rival, which was listed by Bain Capital last year, as brickmakers expand after slashing workforces and closing plants in the wake of the property crash.

Forterra operates 17 factories and 12 quarries across Britain. The shares lost ¾p to close at 176p.

Wall Street report
The Dow Jones industrial average was attempting something of a tightrope walk yesterday, wobbling between tiny gains and losses before finally settling on the positive side of the line, closing 13.08 points up (a whopping 0.07 per cent) at 17,990.32.

Travelling to the Grand National